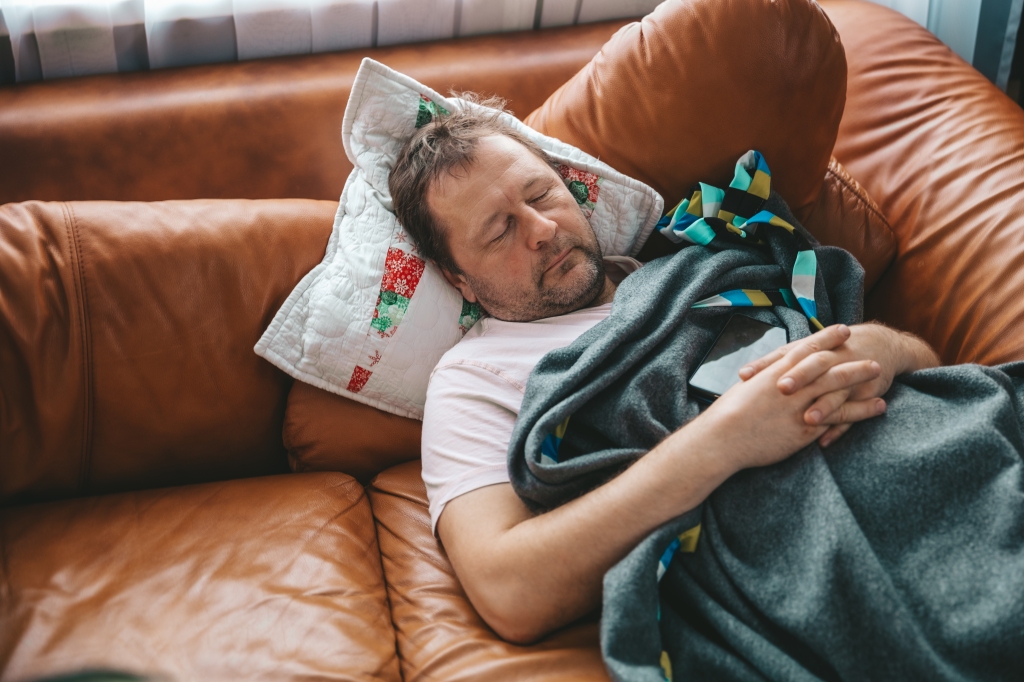 Relaxed man resting on a couch at home, A tired Husband, Dad sleeps under a blanket on the sofa

SAINT PAUL, MN–Cody Feldspar really felt the love on Father’s Day this year. His wife Fiona and two teenage kids, Tyler and Dori, took him out to the Minnesota Twins baseball game. The seats were weak, but they plied Cody with beer and hot dogs, and he even got some Dippin’ Dots after a minor tantrum with Fiona. After the game, Cody played catch with Tyler, followed by a stunning upset over Dori in Scrabble. Fiona ordered up Detroit-style pizza for dinner, and the day was damn near perfect.

To cap the evening, the family let Cody select whatever movie he wanted to watch. Without hesitation, and exactly as everyone feared, he picked Braveheart. Given it was already past 8 pm and with the film’s 178-minute runtime, there was no chance in hell Cody could stay awake through it. Fiona conveyed this concern, reminding her husband that he rarely stays up past 9:30 and even more rarely makes it through a movie without drooling all over the couch. To make matters worse, nobody else in the family liked Braveheart. So once Cody falls asleep, they’d all be stuck watching Mel Gibson out of obligation. It was a recipe for disaster.

In a last-ditch effort, Dori attempted to throw her father off his course. “Dad, how about we watch something under two hours? You’ve never made it through all of Braveheart. You say it’s your favorite movie, but I’m pretty sure you think Mel Gibson’s freedom speech is at the end. It’s like halfway through. There’s so much more movie after that,” she pleaded. Cody considered her request, identifying similarly desperate looks from Fiona and Tyler. “What about Dumb & Dumber? It’s one of your favorites,” whispered Tyler. A pensive silence followed as Cody considered.

“I’ll be able to stay awake,” Cody assured his concerned family members. The declaration was met with defeated groans. Following the deliberation, Cody decided he was in a Heath Ledger mood and put on The Patriot instead. At 175-minutes, it was three minutes shorter than Braveheart, though the time lost deciding on the film certainly killed any hopes of an earlier finish. Cody slept through the entire film.